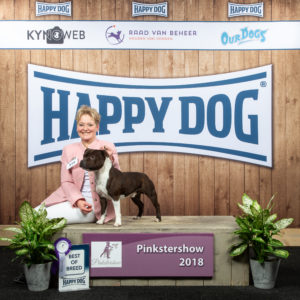 My first involvement with Staffords was in 1997 when we purchased our first Stafford called Brawny’s Joey, we didn’t have any plans in regard to breeding or showing or whatsoever,., we just wanted a pet.
How things can change! Our first Staffordshire Bull Terrier that rocked the boat in the showring was imported from Germany, his name was Ch. Hot Staff’s Fellow at Staffjoy’s Jw’01 W’03, he gained many C.C’s in several countries and was Top Stafford in the Netherlands 2002. He  also was the first-ever placed Staffordshire Bull Terrier coming from Germany at Crufts [2003].  In 2001 our first litter was born and to date 9  Staffjoy’s Staffords carry the title of Champion on the Continent, the U.S.A and Brazil, amongst them Ch. Staffjoy’s Titian Queen who was Top Stafford in the Netherlands.

As (co-)owner I campaigned quite a few Staffordshire Bull Terriers to their championtitles. They’re all more than worth mentioning but I restrict myself to Champion GoldStaff Checkpoint who also was Top Stafford 2018 in the Netherlands  We also imported Staffordshire Bull Terriers who contributed to our breeding and left their marks in the showring by gaining  their championtitles.

In 2004 I got appointed by the Dutch Kennelclub as an International Championship show judge for the Staffordshire Bull Terrier. I’ve judged in South Africa, Belgium, Poland, Germany, Ireland, Australia, Czech Republic, France, New Zealand, Italy, the United States, Mexico, Finland, Denmark,  the Netherlands and Great Britain. In Great Britain, I had the honour to award CC’s in our breed twice  and two more championship appointments are scheduled.

I’ve been involved with  the Staffordshire Bull Terrier Club Netherlands as a secretary and editor of the clubmagazine and was closely involved with the organisation of the first few editions of the International Stafford Match.

One of the most rewarding things I like to do is giving breedspecificseminars, which I’ve done in the Netherlands, Italy and Mexico. I believe by doing I can give something back to the breed that has given me so much. In the U.K. I’ve given presentations twice about different to our breed related topics. In recent times I’m the host for the Active Staffordshire Bull Terrier Group’s Online Chatroom in which our guests are people who’re leaving their marks in Staffordshire Bull Terriers and that can as a breeder, artist,  judge, agility judge or organizer of big sport events.

It’s a real big honour to been asked to judge at your Bayern Cup 2021.  2020 and the great part of 2021 has been very different to the world of showing of dogs as we used to know it.  I can’t think of a more appropriate show to get in the ring again after such a period.

Yours in Staffords,
Bianca Janssen 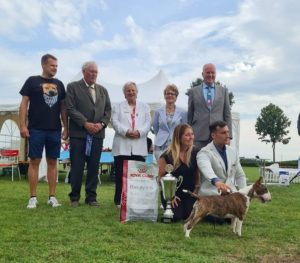 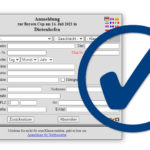 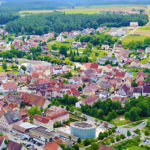